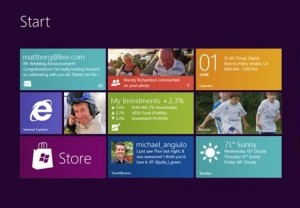 If you’re like most people, you may still be getting used to the fancy ‘new’ Windows 7 operating system (which has just celebrated its second birthday, making it virtually middle-aged in computing terms). If that’s the case, you may be shocked to learn that there’s another major release of the Windows line coming up in 2012, the creatively named ‘Windows 8’.

Despite the familiar name and the relative backwards compatibility, version 8 introduces some dramatic and exciting paradigm shifts in how users interact with it. A staple of Windows for the past sixteen years, the Start menu, will apparently be left out of this version by default. In its place is a very clean, touch-screen inspired interface called Metro, which is built on ubiquitous HTML5 and Javascript technology. This unique layout engine seems to encourage simplicity and immersiveness in its native apps, some of which are embedded directly into the user interface similar to Gadgets in Windows 7.

Microsoft’s plan is to roll this OS out as a single suite solution for as many different devices as possible. Obviously PCs will be its focus. However its intention to make a dent in the lucrative tablet market seems equally obvious, as the new Metro interface is designed specifically to make interactions in touch-screen environments more efficient and friendly.

While it’s still in the development phase, and it’s certain that some changes will be implemented before its projected 2012 release date, it certainly seems that this version has the potential to dramatically change the way we interact with our personal computers.

For more information about the new OS, watch this video by Microsoft – Building “Windows 8”, or to learn more about Windows 8 Metro read this article from The Guardian